BÖLLE isch lebe. We’ve been preaching it for a while now. And rightfully so, BÖLLE isch lebe! It’s life. Our life. And maybe or hopefully your life too. But unfortunately for many people in this world life is not just about putting a basketball through a hoop. For many people it’s surviving. Living is surviving. Many don’t survive. Many people suffer, whether it’s because of poverty, diseases, hunger or simply because of their skin color. So, to make things clear… yes we promote basketball, sports, a healthy lifestyle and so on. Yes, we will sell savage BÖLLE merch and organize legendary events soon. BUT we also want you to be aware that there’s more than this to it. We wanna share humbleness, gratefulness and help where we can. Therefore we will start a project in Guinea, Africa. Since we have direct ties, we’re making sure to allocate it properly. And not just because of the recent BLM movement but because BLACK LIFES IN AFRICA NEVER MATTERED. Of course we won’t fix the world alone but it’s better than nothing. You can always be a decent human, meaning just be nice. Help when you can, help where it’s urgent. So, with every purchased product from BÖLLE you can help us because a part of it will go to our humanitarian project in Guinea. The project is planned for Summer 2021. That’s what BÖLLE stands for. We’re local, we’re small but we strive for more with the limited resources we have. Stay tuned. Stay humble. Be nice. Together we can change more than you think. BÖLLE isch family. BÖLLE isch lebe. 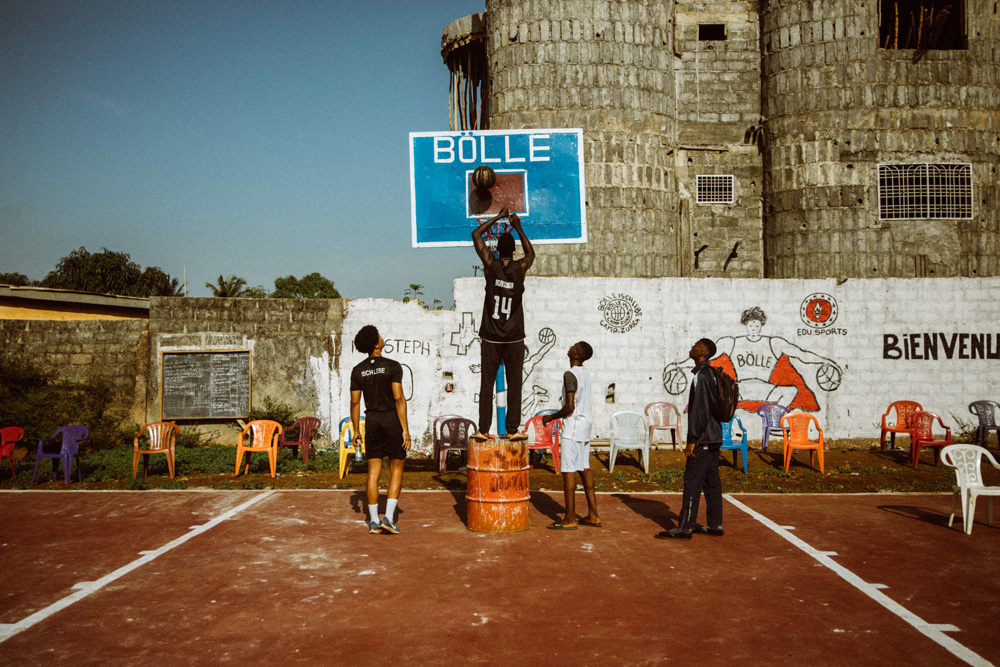 What we did so far:

After receiving a lot of love and support we decided to start an I Believe In You Go Fund Me. This was needed to actually complete our humanitarian projec which was to build a new court in Guinea. And in just 5 weeks before we were flying out, we were able to
collect: 5653.00 CHF. We also had 715.05 CHF from the Store sales and private donations. This amount was exactly needed to build a new outdoor basketball court in Conakry, Guinea. Planned was that Malik and Vid both head down to to Africa but oddly Vid couldn’t come as he took the first team in history from the german part of Switzerland to the Swiss basketball finals (https://starwings.ch/der-titel-traum-geht-weiter/). The feelings were mixed but BÖLLE ISCH LEBE so it all made sense: Malik built a new basketball court in his home country and Vid competed in the Finals in his rookie year as a pro. At the end of the day Malik did an incredible job in Guinea and everything went smooth and just as planned. The court was built, the money was used to its fullest purpose and the people from Conakry had so much joy which was incredible to witness. It is very humbling to see that so many people helped us even though it all occurred during a difficult CoVid season. So we say thank you to all of you and we hope that this is just the beginning of this project. We are also very proud of ourselves that the vision we had has become reality. It is rare that a couple students decide to do things like a project in Africa (fully by themselves!) but we just followed our hearts and did what felt right to do at that time. We hope this can inspire more people from Switzerland or from anywhere to show some love to places where it’s really needed. Even if it’s small, it is better than nothing. Here the link to some pictures for the Guinea Project:

What’s next?
Next step is to make sure that the court stays well in use. Meaning maintenance, supply with Basketball gear like nets, balls etc. and to support the school team with jerseys. A long term goal is to build a closed gym, where they can play during the resin season as well. Unfortunately there’s no such facility and we are really working on fulfilling this mission. Another goal is to bring the team or a couple of players to the BÖLLE ISCH LEBE CAMP next summer where they can experience Switzerland and the Basketball competition in europe. Now these are all goals and maybe still dreams but we will
definitely inform you when we actually start the process of each goal. So stay tuned because there’s a lot coming.

How can you help:
With every Merchandise sold we collect 5% and will add it to use into the Guinea Project. Potentially we will start another Go Fund me, where people can directly donate but again this will follow once we get the detailed plans ahead of us. You want to stay
updated? Follow us on Instagram for the latest BÖLLE news.